We provide handwritten PDF and Hardcopy to our IGNOU and other university students. There are several types of handwritten assignment we provide all Over India. BECC 114 Development Economics-II Solved Assignment 2022-23 Download Free We have worked in this field for so long. You can get your assignment done – 8130208920

Important Note – IGNOU BECC 114 Solved Assignment 2022-2023  Download Free You may be aware that you need to submit your assignments before you can appear for the Term End Exams. Please remember to keep a copy of your completed assignment, just in case the one you submitted is lost in transit.

Answer the following Descriptive Category questions in about 500 words each. Each question carries 20 marks. Word limit does not apply in case of numerical questions in Assignment One.

Answer the following Middle Category questions in about 250 words each. Each question carries 10 marks. Word limit does not apply in case of numerical questions in Assignment Two.

Answer the following Short Category questions in about 100 words each. Each question carries 6 marks in Assignment Three.

1. Discuss the theory of demographic transition.

According to this theory, economic development has the effect of bringing about a reduction in the death rate.

The relationship between birth and death rates changes with economic development and a country has to pass through different stages of population growth. C.P. Blacker divided population into five types as high, stationary, early expanding, low stationary and diminishing. According to the theory of demographic transition, population growth will have to pass through these different stages during the course of economic development.

The four stages of demographic transition mentioned by Max are explained as follows:

This stage has been called high population growth potential stage. It is characterised by high and fluctuating birth and death rates which will almost neutralize each other. People mostly live in rural areas and their main occupation is agriculture which is in the stage of backwardness. The tertiary sector consisting of transport, commerce banking and insurance is underdeveloped.

All these factors are responsible for low income and poverty of the masses. Social beliefs and customs play an important role in keeping birth rate high. Death rate is also high because of primitive sanitation and absence of medical facilities. People live in dirty and unhealthy surroundings.

As a result, they are disease ridden and the absence of proper medical care results in large deaths. The mortality rate is highest among the poor. Thus, high birth rates and death rates remain approximately equal over time so that a static equilibrium with zero population growth prevails.

It is called the stage of Population Explosion. In this stage the death rate is decreasing while the birth rate remains constant at a high level. Agricultural and industrial productivity increases, means of transport and communication develops. There is great mobility of labour. Education expands. Income also increases. People get more and better quality of food products. Medical and health facilities are expanded. 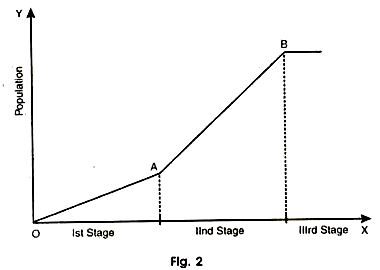 During the stage economic development is speeded up due to individual and government efforts. Increased use of better technology, mechanization and urbanisation takes place. But there is no substantial change in the men, attitude of the people and hence birth rate stays high i.e., economic development has not yet started affecting the birth rate. 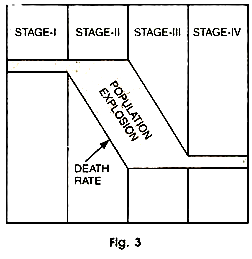 Latin American dependency theory is a strand of political-economic thought that developed out of the UN Economic Commission for Latin America and the Caribbean (ECLAC) shortly after World War II. Dependency theorists sought to explain persistent levels of under-development in Latin America by situating national economies within their global economic context. Notable scholars in this intellectual tradition include Raúl Prebisch, Fernando Cardoso, and Andre Gunder Frank, and dependency theory as articulated by Latin Americanists came to later influence the world-systems analysis promoted by Immanuel Wallerstein, Giovanni Arrighi, and Christopher Chase-Dunn.

Dependency theory argues that under-development as experienced in Latin America and elsewhere is the direct result of capital intervention, rather than a condition of “lacking” development or investment. Prebisch, Gunder Frank, and others put forth that the very same processes that generate high-incomes in Western Europe and the United States are those that maintain the rest of the world in a state of dependency vis-à-vis wealth extraction. Rather than looking towards country-level characteristics to explain development, as per earlier theorizations, dependency theory asks that social scientists reorient their analyses to attend to the global economic forces that dictate development disparities both between and within nation-states. In the neoliberal era, dependency theory’s key theoretical insight — that global capital flows structure development and under-development — remains highly relevant. This essay traces the intellectual lineage of dependency theory as articulated in Latin America, several competing strands of thought from scholars working in this tradition, and some consequences of dependency theory for policy praxis and social science research.

Dependency theory as an intellectual movement emerged as a response to modernization theory, a quasi-evolutionary model of economic development that posited that nations move linearly through successive stages of growth (Gunder Frank 1969; Rostow 1959). Economist William Rostow, one of modernization theory’s chief architects, proposed five distinct stages of economic development, beginning with “traditional,” agrarian societies, moving upward through greater investment in manufacturing, before culminating in an urbanized national economy oriented towards the mass production of consumer goods (Ibid.). In response, ECLAC economist Raúl Prebisch and Andre Gunder Frank argued that Rostow’s model assumes a false dichotomy between “traditional” and “modern” societies, and disputed Rostow’s presumption of a global economic structure that would allow for all nations to pass through these stages successfully (Prebisch 1962).

Prior to joining ECLAC, Prebisch served as Argentina’s chief trade diplomat during the 1930s, when a British market crash heavily affected demand for Argentina’s primary exports, beef and grains (Dosman 2008). Attuned to how closely Argentina’s economic fortunes depended on the health of northern markets, Prebisch worked with UN economist Hans Singer to develop the Prebisch-Singer thesis, which formalized one of dependency theory’s primary tenets. Prebisch and Singer used trade data between wealthier, northern countries and Latin America to analyze the aggregate terms of trade of these interactions, ultimately concluding that an imbalance inherent to this exchange resulted in a constant flow of capital out of Latin America (Prebisch 1959). While Latin American countries exported primary goods like food products, lumber and minerals to the Global North, they tended to re-import manufactured products from these same countries. The value added to these manufactured commodities — typically constructed from the primary inputs imported earlier — generated profit for northern countries while maintaining Latin American countries in a perpetual trade deficit. This wealthy global core exists in a semi-permanent extractive relationship with a low-income periphery.

Dependency theorists typically fall within two intellectual camps: liberal reformers such as Prebisch, who ultimately believed that a higher standard of living could be achieved through targeted policy intervention, and neo-Marxists, who advocated for a socialist, command-centered economy (Knuttson 2009). This split hinges upon a key theoretical distinction. Prebisch and others thought that economic development could be achieved through a series of economic policy prescriptions that would encourage domestic industry. As Ramón Grosfoguel argues, this statist approach to development predates dependency theory by approximately a century in Latin America (2000). Fernando Cardoso and Enrique Faletto (1979) concurred, arguing that the organization of internal national markets and national political arrangements can impact the degree of dependence. Accordingly, Prebisch, Cardoso and Faletto advocated for protectionist economic policies that would allow internal markets to develop (Ibid). Import-substitution industrialization (ISI) would achieve this goal by adding heavy tariffs to manufactured goods imported from the global North, effectively subsidizing domestic industry.

In contrast, neo-Marxist dependency theorists argued that escaping an exploitative dependent relationship with core countries would only be achievable through socialism. According to this perspective, because Latin American nations occupy a specific niche within a global division of labor; the economic hegemony of the global North could only be truly upset by challenging the capitalist mode of production. While an orthodox Marxist perspective posits that imperialism will eventually advance societies towards communism, Gunder Frank and neo-Marxist dependency theorists viewed the core/periphery relationship as a constraining structure that would maintain Latin American nations in an indefinite state of dependency (1966). One further intellectual offshoot of the neo-Marxist camp of Latin American dependency theory is world-systems analysis, as pioneered by Immanuel Wallerstein, Samir Amin, and Andre Gunder Frank. These theorists extend the main theoretical insight of dependency theory — that a global political economy structures inequality within and between contemporary nation-states — to develop a macrosociological perspective that seeks to explain global economic change across centuries, including the rise and fall of hegemonic polities and the process of incorporation in the capitalist world-system (Chase-Dunn 2001).

Throughout the 1940s and 1950s, governments in Mexico, Brazil, Argentina and Chile adopted ISI policies in an attempt to move their economies away from the production of primary goods for export and to encourage the development of domestic manufacturing. Nonetheless, policy-related and analytical criticisms of dependency theory mounted. Policymakers challenged Prebisch’s central findings, arguing that the unequal terms of trade hypothesis rested on theoretical assumptions that did not function as anticipated on the ground (Ghosh 2001). Theorists subsequently became unsatisfied with some of the central tenets of dependency theory, which proved unable to explain movement from peripheral to core status and like Rostow’s modernization theory, reified “stages” of development (Grosfoguel 2000). Prebisch himself watched with growing concern as Latin American governments accrued greater levels of foreign debt to support subsidies for domestic industry (Dosman 2008). After a series of debt crises throughout the 1980s, the World Bank and International Monetary Fund (IMF) cut these protections, demanding instead the implementation of structural adjustment programs (SAPs) that slashed state services and encouraged privatization more generally. Due to the current hegemony of deregulation as a policy best practice backed by international finance institutions, dependency theory is no longer widely applied as a policy prescription in Latin America.

Nonetheless, the main theoretical insights of dependency theory remain valuable for contemporary social scientists studying persistent economic inequalities in Latin America and other nations across the Global South. By drawing attention to the economic processes that extract wealth from Latin America to the Global North, dependency theorists challenged the fundamental assumptions that previously structured development policy discourse: that Latin America’s export-oriented economies are feudal and backwards, that modernity is to be equated with industrialization, and that all nations are equally able to move through ascribed “stages” of development.

Dependency theorists also laid the groundwork for some of the major research agendas of world-system analysis, including studies of the international division of labor, commodity chains, and global cities (Sassen 1991). In the twenty-first century, as national borders appear to lose relevance in the face of multi-national corporations and an entrenched transnational capitalist class, world-systems analysis must now attend to the role the inter-state system does or does not play in structuring the global political economy (Robinson 2017). An overt analytical focus on the nation-state can also obscure deep inequalities within Latin American societies, although Cardoso (1979) and others (Quijano 1967) attempted to account for intra-state core/periphery relationships by mapping out the entanglements between national comprador classes, international capital and local political systems. Nonetheless, dependency theory’s enduring contribution is a globally-oriented analytical framework that permits social scientists to understand how cross-national economic systems structure national-level development outcomes.

3) Differentiate between share tenancy and fixed-rental system. Explain the Marshallian argument about the inefficiency of share tenancy.

5) Distinguish among private goods, Community Property Recourse (CPR), and public goods. Explain why a CPR is an “incomplete property right.”

7) Write short notes on the following.
(a) The Harris-Todaro model.
(b) Social Capital.
(c) Sustainable Development

IGNOU BECC 114 Solved Assignment 2022-23 You will find it useful to keep the following points in mind:

What is Seed Bank ? Advantage & Disadvantage

Explain the human-environment relationship by taking examples of biotic and abiotic components?