We provide handwritten PDF and Hardcopy to our IGNOU and other university students. There are several types of handwritten assignment we provide all Over India. BECE 145 INDIAN ECONOMY I Solved Assignment 2022-23 Download Free We are genuinely work in this field for so many time. You can get your assignment done – 8130208920

Important Note – IGNOU BECE 145 Solved Assignment 2022-2023  Download Free You may be aware that you need to submit your assignments before you can appear for the Term End Exams. Please remember to keep a copy of your completed assignment, just in case the one you submitted is lost in transit.

The following points highlight the changes that have taken place in the Indian economy after 1951. The changes are grouped into: 1. Quantitative Changes 2. Qualitative Changes.

i. Rising trend of National Income and per Capita Income:

Economic growth of any country is measured by the increase in national and per capita output.

Compared to the pre-independence figure, this is really remarkable. However, the performance of the Indian economy in this direction in the 1980s, 1990s was certainly praiseworthy since it recorded a growth rate of more than 6 p.c. p.a. GDP growth rate in the 2000s is unprecedented.

Historically, it exhibits a better growth rate. Yet, it is inadequate compared to the needs of the country. The only encouraging aspect is that it shows a rising trend.

During the plan period, 1950-2007, the overall achievement in this sector is more than 4.8 p.c. Trend growth of India’s exports shows Indian agricultural and industry on the move.

During the plan period, not only economic growth picked up, but also economic development i.e., ‘growth plus change’ occurred in India. This amounts to saying that the Indian economy witnessed structural changes.

By economic structure we mean interrelationship among the different productive sectors i.e., agriculture and allied activities (known as the primary sector), manufacturing and industries (called the secondary sector), and trade and services (or the tertiary sector).

Not only this, the bulk of the population derives their livelihood from this sector.

On the other hand, in the sectoral composition of national income as well as in the occupational pattern, the importance of the secondary and tertiary sectors gets reduced. As economic development proceeds, the interrelationships among these sectors undergo a change.

As economic development takes place, the primary sector (from the standpoint of sectoral composition of national income and occupational pattern) loses its importance and secondary as well as tertiary sectors gain in importance. Thus, structural changes indicate economic development. This is what Colin Clark hypothesized.

We will see whether structural changes have taken place in India during the Plan Period:

i. Sectoral Composition of National Income:

On the other hand, over the plan period, as the industrial sector expanded, its contribution to GDP has been on the rise and it rose to 25 p.c. in 2007-08.

Along with the growth of the secondary sector, the services sector also registered a higher growth rate. In 2007-08, its contribution was 55.7 p.c. Thus, it is clear that as economic development took place during the last five decades of planning, the primary sector lost its pre-eminence, as against 29.2 p.c. in 1950. This, of course, is a sign of economic development. 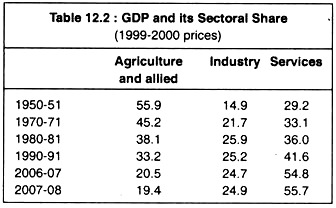 One can make a better analysis of structural changes if the entire period is divided in the following sub-periods, as shown in Table 12.3: 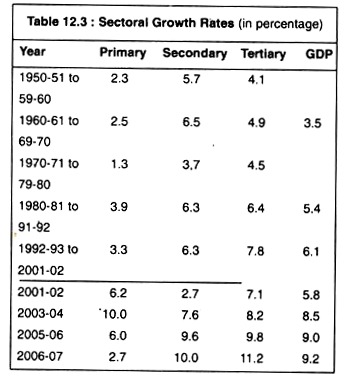 The GDP growth rate between 1950-51 and 1979-80 came to be known as ‘Hindu rate of Growth’ of 3.5 p.c. p.a. But this long-term trend has been broken and in 2006-07 GDP growth rate went past 9 p.c. p.a. along with the rising growth trend of especially service sector and then industry sector. But primary sector’s performance is rather unsatisfactory in the current year.

It is clear that despite the green revolution in agriculture, the share of the primary sector to GDP has been continuously declining. However, between 1980-81 and 1991-92, primary sector displayed a better growth rate. Variation in the performance of agriculture is always worth noticing.

In the last three or four years, because of good monsoon, agricultural growth rate was remarkable, but in the year 2007-08, its performance has slackened in a larger degree.

Unfortunately, between 1990-91 and 2007-08, there has been a fall in the growth of the secondary sector from 25.2 p.c. to 24.9 p.c. Thus, the pattern of structural changes that has taken place in India has deviated from developed economies.

Present growth trend is dominated by the services sector. Very aptly, it is called service-led growth. But what we see in India is the ‘excess growth of the service sector’. Possibly, India may display a new paradigm of development.

Expansion of the tertiary sector is tantamount to modernisation. Yet, we must say that the growth of the services sector at the expense of the commodity sector is undesirable. Though sectoral composition of national income itself indicates economic development, the growth of the service sector at the cost of the commodity sector reflects some sort of ‘structural retrogression’.

In the light of structural change, one finds India’s occupational structure as a static one. But we know that as economic development takes place, occupational structure also undergoes a change. The Clark- Fisher thesis says that, in an expanding economy, employment situation shifts more and more in favour of secondary and tertiary sectors.

That is to say, the number of people engaged in the primary sector tend to decline while it tends to rise in the other two sectors.

Thus, it is clear that the occupational pattern is not only a static one but also an unbalanced one. In view of this, V. K. R. V. Rao commented that India’s occupational structure exhibits ‘structural retrogression.’ This, of course, is not a healthy sign and it explains underdevelopment.

2) Discuss the importance of ‘Governance Indicators’ outlining its significance for development.

As governance indicators have proliferated in recent years, so has their use and the controversy that surrounds  them. As more and more voices are pointing out, existing indicators – many of them developed and launched in the 1990s – have a number of flaws. This is particularly disquieting at a time when governance is at the very top of the development agenda.

Many questions of crucial importance to the development community – such as issues around the relationship between governance and (inclusive) growth, or about the effectiveness of aid in different contexts – are impossible to answer with confidence as long as we do not have good enough indicators, and hence data, on governance.

The litany of problems concerning existing governance indicators has been growing:

Given the scarcity of (public) governance indicators in the mid-1990s, and the limited opportunity to fund work on such indicators at the time, the WGI and the CPI  made very important contributions in raising the profile of governance issues and to looking at governance in a more systematic way. However, as the relative importance of governance to development thinking has grown, there is a need now to go a step further.

In light of the diagnosed flaws, some individuals and agencies oppose internationally comparable governance indicators on principle. But this amounts to giving up a potentially powerful tool for analysis and policy guidance.

Rather, we should focus on developing better indicators. No indicators, however scrupulously produced, will be perfect. An abstract and qualitative concept such as governance – and its various dimensions – will remain difficult to measure. However, improvements are possible, and better governance indicators would be an important global public good for development research and policy.

I propose that such indicators should be based on four key principles:

To generate such sets of governance indicators, development agencies should create a pool of funding (as they have done to assess the quality of Public Financial Management through PEFA assessments). Ideally, the actual task of designing and implementing the indicators should be given to an independent body – a university or independent think tank – to ensure wide credibility. This body could, in turn, be obliged to ensure transparency and accessibility of the resulting data. At least initially, existing governance indicators based on aggregations would most likely continue to be produced in parallel – and would, in fact, draw on the new primary data set(s).

Such an effort could include, or be combined with, sector and issue specific indicators, such as measuring the quality of the civil service, or of public investment spending. Specific indicators are needed to guide actual interventions, and to monitor progress in specific areas. This would help to support systematic and comparative lesson learning on many governance interventions – an aspect that has also been an important gap to date.

The international development community should act on these issues – and sooner rather than later – if it is serious about governance and its role in development processes. Building up data-sets of new indicators, and particularly the construction of time-series of such data, takes time – but it is an important investment to make.

3) Analyse the growth in the National Income of India over the different plan periods.
4) Explain the trends in ‘demographic transition’ in India.
5) Outline the measures initiated to combat poverty in India during the post-2010 years

6) Differentiate between the following.
(a) Absolute Poverty and Relative Poverty.
(b) Horizontal Inequality and Vertical Inequality.
(c) Physical and Social Infrastructure.

7) Write short notes on the following.
(a) BoP.
(b) Limitations of Per Capita Income.
(c) Social Progress Index and World Happiness Index

IGNOU BECE 145 Solved Assignment 2022-23 You will find it useful to keep the following points in mind:

What is Seed Bank ? Advantage & Disadvantage

Explain the human-environment relationship by taking examples of biotic and abiotic components?